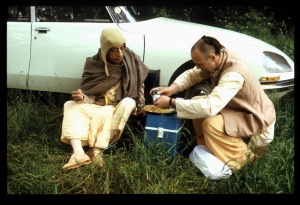 This system of yoga for controlling the breathing process is called prāṇāyāma, and in the beginning it is practiced in the haṭha-yoga system through different sitting postures. All of these processes are recommended for controlling the senses and for advancement in spiritual realization. This practice involves controlling the air within the body to enable simultaneous passage in opposite directions. The apāna air goes downward, and the prāṇa air goes up. The prāṇāyāma yogī practices breathing the opposite way until the currents are neutralized into pūraka, equilibrium. Similarly, when the exhaled breathing is offered to inhaled breathing, it is called recaka. When both air currents are completely stopped, it is called kumbhaka-yoga. By practice of kumbhaka-yoga, the yogīs increase the duration of life by many, many years. A Kṛṣṇa conscious person, however, being always situated in the transcendental loving service of the Lord, automatically becomes the controller of the senses. His senses, being always engaged in the service of Kṛṣṇa, have no chance of becoming otherwise engaged. So at the end of life, he is naturally transferred to the transcendental plane of Lord Kṛṣṇa; consequently he makes no attempt to increase his longevity. He is at once raised to the platform of liberation. A Kṛṣṇa conscious person begins from the transcendental stage, and he is constantly in that consciousness. Therefore, there is no falling down, and ultimately he enters into the abode of the Lord without delay. The practice of reduced eating is automatically done when one eats only Kṛṣṇa prasādam, or food which is offered first to the Lord. Reducing the eating process is very helpful in the matter of sense control. And without sense control there is no possibility of getting out of the material entanglement.