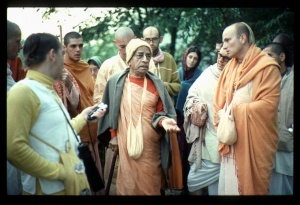 Unless one is engaged in the devotional service of the Lord, mere renunciation of activities cannot make one happy. The sages, purified by works of devotion, achieve the Supreme without delay.

There are two classes of sannyāsīs, or persons in the renounced order of life. The Māyāvādī sannyāsīs are engaged in the study of sāṅkhya philosophy, whereas the Vaisnava sannyāsīs are engaged in the study of Bhāgavatam philosophy, which affords the proper commentary on the Vedānta-sūtras. The Māyāvādī sannyāsīs also study the Vedānta-sūtras, but use their own commentary, called Śārīraka-bhāṣya, written by Śaṅkarācārya. The students of the Bhāgavata school are engaged in devotional service of the Lord, according to pāñcarātrikī regulations, and therefore the Vaiṣṇava sannyāsīs have multiple engagements in the transcendental service of the Lord. The Vaiṣṇava sannyāsīs have nothing to do with material activities, and yet they perform various activities in their devotional service to the Lord. But the Māyāvādī sannyāsīs, engaged in the studies of sāṅkhya and Vedānta and speculation, cannot relish transcendental service of the Lord. Because their studies become very tedious, they sometimes become tired of Brahman speculation, and thus they take shelter of the Bhāgavatam without proper understanding. Consequently their study of the Śrīmad-Bhāgavatam becomes troublesome. Dry speculations and impersonal interpretations by artificial means are all useless for the Māyāvādī sannyāsīs. The Vaiṣṇava sannyāsīs, who are engaged in devotional service, are happy in the discharge of their transcendental duties, and they have the guarantee of ultimate entrance into the kingdom of God. The Māyāvādī sannyāsīs sometimes fall down from the path of self-realization and again enter into material activities of a philanthropic and altruistic nature, which are nothing but material engagements. Therefore, the conclusion is that those who are engaged in Kṛṣṇa consciousness are better situated than the sannyāsīs engaged in simple Brahman speculation, although they too come to Kṛṣṇa consciousness, after many births.