Śrī Caitanya-caritāmṛta - Ādi-līlā - Chapter 17: The Pastimes of Lord Caitanya Mahāprabhu in His Youth 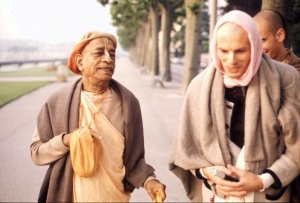 “[The Supreme Personality of Godhead, Kṛṣṇa, said:] ‘My dear Uddhava, neither through aṣṭāṅga-yoga [the mystic yoga system to control the senses], nor through impersonal monism or an analytical study of the Absolute Truth, nor through study of the Vedas, nor through austerities, charity or acceptance of sannyāsa can one satisfy Me as much as by developing unalloyed devotional service unto Me.’”

Karmīs, jñānīs, yogīs, tapasvīs and students of Vedic literature who do not have Kṛṣṇa consciousness simply beat around the bush and do not get any final profit because they have no clear knowledge of the Supreme Personality of Godhead. Nor do they have faith in approaching Him by discharging devotional service, although everywhere such service is repeatedly emphasized, as it is in this verse from Śrīmad-Bhāgavatam (SB 11.14.20). The Bhagavad-gītā (BG 18.55) also declares, bhaktyā mām abhijānāti yāvān yaś cāsmi tattvataḥ: “One can understand the Supreme Personality as He is only by devotional service.” If one wants to understand the Supreme Personality factually, he must take to the path of devotional service and not waste time in profitless philosophical speculation, fruitive activity, mystic yogic practice or severe austerity and penance. Elsewhere in the Bhagavad-gītā (BG 12.5) the Lord confirms, kleśo ’dhikataras teṣām avyaktāsakta-cetasām: “For those whose minds are attached to the unmanifested, impersonal feature of the Supreme, advancement is very troublesome.” People who are attached to the impersonal feature of the Lord are obliged to take great trouble, yet nevertheless they cannot understand the Absolute Truth. As explained in Śrīmad-Bhāgavatam (SB 1.2.11), brahmeti paramātmeti bhagavān iti śabdyate. Unless one understands the Supreme Personality of Godhead, the original source of both Brahman and Paramātmā, one is still in darkness about the Absolute Truth.