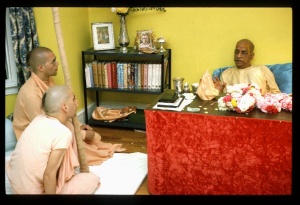 Śrī Caitanya Mahāprabhu said, “Although it is correct that the King is a great devotee, he is still to be considered a venomous snake. Similarly, even though a woman be made of wood, one becomes agitated simply by touching her form.

Even though a woman be made of wood or stone, she becomes attractive when decorated. One becomes sexually agitated even by touching the form. Therefore one should not trust his mind, which is so fickle that it can give way to enemies at any moment. The mind is always accompanied by six enemies—namely, kāma, krodha, mada, moha, mātsarya and bhaya—that is, lust, anger, intoxication, illusion, envy and fear. Although the mind may be merged in spiritual consciousness, one should always be very careful in dealing with it, just as one is careful in dealing with a snake. One should never think that his mind is trained and that he can do whatever he likes. One interested in spiritual life should always engage his mind in the service of the Lord so that the enemies of the mind, who always accompany the mind, will be subdued. If the mind is not engaged in Kṛṣṇa consciousness at every moment, there is a chance that it will give way to its enemies. In this way we become victims of the mind.

Chanting the Hare Kṛṣṇa mantra engages the mind at the lotus feet of Kṛṣṇa constantly; thus the mind’s enemies do not have a chance to strike. Following Śrī Caitanya Mahāprabhu’s example in these verses, we should be very careful in dealing with the mind, which should not be indulged in any circumstance. Once we indulge the mind, it can create havoc in this life, even though we may be spiritually advanced. The mind is specifically agitated through the association of materialistic men and women. Therefore Śrī Caitanya Mahāprabhu, through His personal behavior, warns everyone to avoid meeting a materialistic person or a woman.