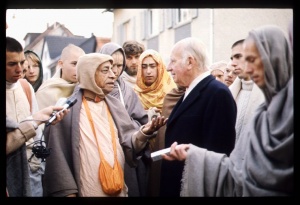 anya-abhilāṣitā-śūnyam—without desires other than those for the service of Lord Kṛṣṇa, or without material desires (such as those for meat-eating, illicit sex, gambling and addiction to intoxicants); jñāna—by the knowledge of the philosophy of the monist Māyāvādīs; karma—by fruitive activities; ādi—by artificially practicing detachment, by the mechanical practice of yoga, by studying the Sāṅkhya philosophy, and so on; anāvṛtam—not covered; ānukūlyena—favorable; kṛṣṇa-anuśīlanam—cultivation of service in relationship to Kṛṣṇa; bhaktiḥ uttamā—first-class devotional service.

“‘When first-class devotional service develops, one must be devoid of all material desires, knowledge obtained by monistic philosophy, and fruitive action. The devotee must constantly serve Kṛṣṇa favorably, as Kṛṣṇa desires.’

This verse is also found in Śrīla Rūpa Gosvāmī’s Bhakti-rasāmṛta-sindhu (1.1.11). As we can understand from the Bhagavad-gītā (9.34 and 18.65), the Supreme Personality of Godhead wants everyone to think of Him always (man-manā bhava mad-bhaktaḥ). Everyone should become His devotee, not the devotee of a demigod. Everyone should engage in His devotional service, including arcana (Deity worship) in the temple. Man-manā bhava mad-bhakto mad-yājī māṁ namaskuru. Everyone should offer obeisances, from moment to moment, to the Supreme Personality of Godhead. These are the desires of the Supreme Lord, and one who fulfills His desires favorably is actually a pure devotee. Kṛṣṇa wants everyone to surrender unto Him, and devotional service means preaching this gospel all over the world. The Lord says openly in the Bhagavad-gītā (BG 18.69), na ca tasmān manuṣyeṣu kaścin me priya-kṛttamaḥ: One who preaches the gospel of the Bhagavad-gītā for the benefit of all is most dear to Kṛṣṇa. The Bhagavad-gītā is spoken by the Lord so that human society can be perfectly organized from all angles of vision—politically, socially, economically, philosophically and religiously. From any point of view, human society can be reformed by the Kṛṣṇa consciousness movement; therefore one who spreads this philosophy of Kṛṣṇa consciousness for the benefit of all conditioned souls in the universe is perfect in pure devotional service.

The criterion is that a devotee must know what Kṛṣṇa wants him to do. This understanding can be achieved through the medium of a spiritual master who is a bona fide representative of Kṛṣṇa. Śrīla Rūpa Gosvāmī advises, ādau gurv-āśrayam. One who is serious in wanting to render pure devotional service to the Lord must take shelter of a spiritual master who comes in the disciplic succession from Kṛṣṇa. Evaṁ paramparā-prāptam imaṁ rājarṣayo viduḥ (BG 4.2). Without accepting a bona fide spiritual master coming in the disciplic succession, one cannot find out the real purpose of devotional service. Therefore one has to accept the shelter of a bona fide spiritual master and agree to be directed by him. The first business of a pure devotee is to satisfy his spiritual master, whose only business is to spread Kṛṣṇa consciousness. And if one can satisfy the spiritual master, Kṛṣṇa is automatically satisfied—yasya prasādād bhagavat-prasādaḥ. This is the success of devotional service. This is the meaning of the word ānukūlyena—that is, favorable devotional service to the Lord. A pure devotee has no plans other than those for the Lord’s service. He is not interested in attaining success in mundane activities. He simply wants success in the progress of devotional service. For a devotee, there cannot be worship of others or demigod worship. A pure devotee does not engage himself in such pseudo devotional service. He is interested only in satisfying Kṛṣṇa. If one lives only for the satisfaction of Kṛṣṇa, it does not matter whether he belongs to this order of life or that order of life. One’s only business should be to satisfy Kṛṣṇa. This process is completely manifest in the activities of the Kṛṣṇa consciousness movement. It has been actually proved that the entire world can accept devotional service without failure. One simply has to follow the instructions of the representative of Kṛṣṇa.