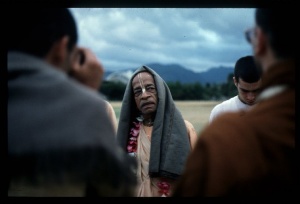 “‘The internal potency of the Supreme Lord, Viṣṇu, is spiritual, as verified by the śāstras. There is another spiritual potency, known as kṣetra-jña, or the living entity. The third potency, which is known as nescience, makes the living entity godless and fills him with fruitive activity.

In the Bhagavad-gītā, in Śrī Kṛṣṇa’s discourse on the kṣetra and the kṣetra-jña, it is clearly stated that the kṣetra-jña is the living entity, who knows his field of activities. The living entities in the material world are forgetful of their eternal relationship with the Supreme Personality of Godhead. This forgetfulness is called avidyā, or nescience. The avidyā-śakti, the avidyā potency of the material world, provokes fruitive activity. Although this avidyā-śakti (material energy, or nescience) is also an energy of the Supreme Personality of Godhead, it is especially intended to keep the living entities in a state of forgetfulness. This is due to their rebellious attitude toward the Lord. Thus although the living entities are constitutionally spiritual, they come under the influence of the potency of nescience. How this happens is described in the following verse.