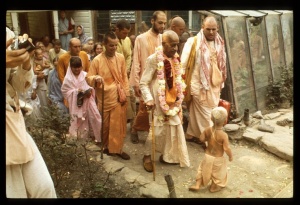 “Śrīla Vyāsadeva presented the Vedānta philosophy for the deliverance of conditioned souls, but if one hears the commentary of Śaṅkarācārya, everything is spoiled.

Factually, the devotional service of the Lord is described in the Vedānta-sūtra, but the Māyāvādī philosophers, the Śaṅkarites, prepared a commentary known as Śārīraka-bhāṣya, in which the transcendental form of the Lord is denied. The Māyāvādī philosophers think that the living entity is identical with the Supreme Soul, Brahman. Their commentaries on the Vedānta-sūtra are completely opposed to the principle of devotional service. Caitanya Mahāprabhu therefore warns us to avoid these commentaries. If one indulges in hearing the Śaṅkarite Śārīraka-bhāṣya, he will certainly be bereft of all real knowledge.

The ambitious Māyāvādī philosophers desire to merge into the existence of the Lord, and this may be accepted as sāyujya-mukti. However, this form of mukti means denying one’s individual existence. In other words, it is a kind of spiritual suicide. This is absolutely opposed to the philosophy of bhakti-yoga. Bhakti-yoga offers immortality to the individual conditioned soul. If one follows the Māyāvādī philosophy, he misses his opportunity to become immortal after giving up the material body. The immortality of the individual person is the highest perfectional stage a living entity can attain.