In Search of the Ultimate Goal of Life 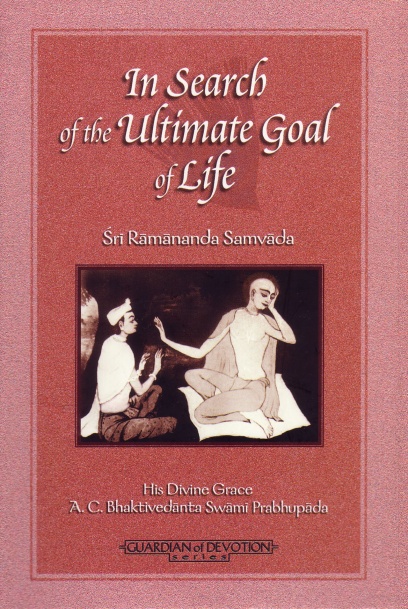 1993 In Search of the Ultimate Goal of Life

Srila Prabhupada had written this manuscript just after his entering the renounced order of life (sannyas) in the year of 1959. The old manuscript of approximately 200 pages was not known until it was discovered in 1977 in Radha Damodar temple in Vrindavana, after the departure of Srila Prabhupada into the spiritual world. The book has been printed under the care and guidance of Bhaktigaurava Narasingha Swami (former Jagat Guru Swami). The book was first printed in 1993.

The subject of this book is about the highly philosophical and confidential discussions between Lord Caitanya and Ramananda Raya. Although Lord Caitanya Mahaprabhu requested that Ramananda Raya may not disclose this topic but keep it as a secret, Srila Krishnadasa Kaviraja Goswami in his Caitanya-caritamrta openly reveals the details of the Lord's talks with Ramananda and encourages all the devotees to enter deeply into their inner meaning.

While on tour of South India, Lord Caitanya Mahaprabhu arrived on the banks of the river Godavari, where He met Sri Ramananda Raya, a great devotee of Sri Krsna. Lord Caitanya expressed a deep desire to hear about Sri Krsna from the lips of Ramananda Raya and requested that Ramananda recite a verse from the revealed scriptures concerning the ultimate goal of life. Ramananda then replied: "If a person performs the prescribed duties of his social position, he awakens his original Krsna consciousness." Supporting his statement, Ramananda then cited a verse from the Visnu Purana (3.8.9):

The Problem Remains the Same

The Name is Absolute

Not Possible to Reciprocate

Not For Ordinary People

The Search of Sri Krsna

By Srimati Radharani's Side

An Eternal Life of Ecstasy

All Are Not Equal

I Have One Doubt

A Mine of Nectar