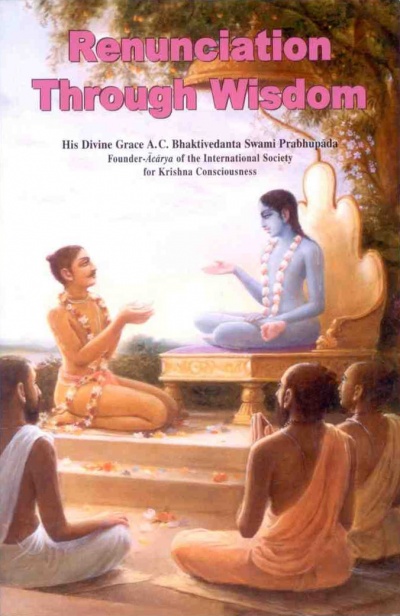 1. Bhagavāner-kathā - Knowledge of the Supreme

2. Bhakti-kathā - The Science of Devotion

5. Buddhi-yoga - The Highest Use of Intelligence

The International Society for Krishna Consciousness (ISKCON) has become well known for its large body of Vedic literature—books on bhakti-yoga that include the Bhagavad-gītā, the Śrīmad-Bhagavatam, and the Caitanya-caritāmṛta. These three works by the movement's founder and spiritual guide, His Divine Grace A.C. Bhaktivedanta Swami Prabhupāda, are voluminous commented English translations of Sanskrit and Bengali classics. Remarkably, Śrīla Prabhupāda wrote these and many other, smaller works in the span of twelve years, from 1966 to 1977, while traveling widely and overseeing the growth of the Kṛṣṇa consciousness movement.

What many people may not know, however, is that during the years before he came to the West Śrīla Prabhupāda wrote extensively on Kṛṣṇa consciousness in his native language, Bengali. In 1976, soon after I joined the Hare Kṛṣṇa movement, I discovered some of Śrīla Prabhupāda's early Bengali writings. They were serialized essays that had appeared in a monthly magazine he edited called Gauḍīya Patrika.

One of these lengthy essays, entitled "Bhagavāner kathā" ("Knowledge of the Supreme") ran in the Gauḍīya Patrika in 1948 and 1949, soon after India won its independence. I decided that it would make a wonderful booklet for Śrīla Prabhupāda's growing number of followers in his native Bengal. When I presented Śrīla Prabhupāda that newly printed booklet in early 1977 in Calcutta, he was extremely pleased. He looked at me with his face shining brilliantly, and with a broad smile he said, "Thank you, thank you very much. Please keep printing my books."

I was so encouraged that I soon collected as many of Śrīla Prabhupada's Bengali writings from the Gauḍīya Patrika as I could and printed them as booklets under the titles "Bhakti Katha" (The Science of Devotion), "Jñāna Katha" (Topics of Spiritual Science), "Muni-gānera Mati-bhrama" (The Deluded Thinkers) and "Buddhi-yoga" (The Highest Use of Intelligence). Finally, I compiled all the booklets into a hardbound book called Vairagya Vidyā, which has now been translated in English and titled Renunciation through Wisdom.

My close friend and Godbrother Sarvabhāvana dāsa did the translation, and he has done a very good job. In each of the original Bengali essays Śrīla Prabhupāda's profound spiritual wisdom shines through, and Sarvabhāvana Prabhu has expertly conveyed this wisdom in his translation.

When Śrīla Prabhupāda wrote these essays, he was a family man playing the part of an insignificant devotee in the Gauḍīya Maṭha, the Kṛṣṇa consciousness society founded by his spiritual master, Śrīla Bhaktisiddhānta Sarasvatī Ṭhākura. Yet despite the humble position Śrīla Prabhupāda was taking at the time, his writings mark him unmistakably as a pure devotee. Anyone with an open mind and a gracious heart will see from his writings that Śrīla Prabhupāda was a self-realized soul all along.

Like his spiritual master, Śrīla Prabhupāda strictly followed the teachings of Śrī Caitanya Mahāprabhu in his presentation of Kṛṣṇa consciousness. Those teachings are summarized in the phrase vairāgya-vidya-nija-bhakti-yoga (CC Madhya 6.254), which means "renunciation through the wisdom that comes from practicing devotional service." This line from a famous verse by Śrīla Sārvabhauma Bhaṭṭācārya, one of Lord Caitanya's intimate disciples, has inspired the title of the present book, Renunciation Through Wisdom.

What is this wisdom which produces renunciation? It is one of the fruits of devotional service to Kṛṣṇa. When one experiences the nectar of devotional service and becomes steeped in the knowledge of the Vedic literature, one naturally becomes averse to sense gratification and attains freedom from material bondage. Lord Kṛṣṇa spoke the essence of Vedic wisdom in the Bhagavad-gītā. As the Gītā-māhātmya, "the Glory of the Bhagavad-gītā" says in this poetic analogy:

the cowherd boy Kṛṣṇa milked the cow of the Upaniṣads [the philosophical essence of the Vedas] for the sake of the calf Arjuna, and the milk that came forth is the Bhagavad-gītā. Saintly persons seriously concerned about their spiritual welfare will drink and relish that wondrous nectarean milk.

In Renunciation Through Wisdom, Śrīla Prabhupāda has simplified the teachings of the Bhagavad-gītā for our understanding. If we drink this nectar, very soon the brilliant sunshine of transcendental knowledge will dispel the darkness of ignorance caused by our unwanted material desires, and then love for Kṛṣṇa will dawn in our hearts.

Transcendental knowledge is eternal; it never becomes dated or outmoded but is always relevant, in all times and places. Therefore, Renunciation Through Wisdom though written forty or more years ago in the context of modern Indian history, can enlighten anyone, in any part of the world. Actually, this wisdom is for everyone, for all time.