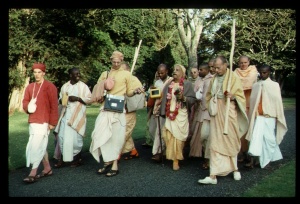 His transcendental acts are magnificent and gracious, and great learned sages like Nārada sing of them. Please, therefore, speak to us, who are eager to hear about the adventures He performs in His various incarnations.

The Personality of Godhead is never inactive as some less intelligent persons suggest. His works are magnificent and magnanimous. His creations both material and spiritual are all wonderful and contain all variegatedness. They are described nicely by such liberated souls as Śrīla Nārada, Vyāsa, Vālmīki, Devala, Asita, Madhva, Śrī Caitanya, Rāmānuja, Viṣṇu Svāmī, Nimbārka, Śrīdhara, Viśvanātha, Baladeva, Bhaktivinoda, Siddhānta Sarasvatī and many other learned and self-realized souls. These creations, both material and spiritual, are full of opulence, beauty and knowledge, but the spiritual realm is more magnificent due to its being full of knowledge, bliss and eternity. The material creations are manifested for some time as perverted shadows of the spiritual kingdom and can be likened to cinemas. They attract people of less intelligent caliber who are attracted by false things. Such foolish men have no information of the reality, and they take it for granted that the false material manifestation is the all in all. But more intelligent men guided by sages like Vyāsa and Nārada know that the eternal kingdom of God is more delightful, larger, and eternally full of bliss and knowledge. Those who are not conversant with the activities of the Lord and His transcendental realm are sometimes favored by the Lord in His adventures as incarnations wherein He displays the eternal bliss of His association in the transcendental realm. By such activities He attracts the conditioned souls of the material world. Some of these conditioned souls are engaged in the false enjoyment of material senses and others in simply negating their real life in the spiritual world. These less intelligent persons are known as karmīs, or fruitive workers, and jñānīs, or dry mental speculators. But above these two classes of men is the transcendentalist known as sātvata, or the devotee, who is busy neither with rampant material activity nor with material speculation. He is engaged in the positive service of the Lord, and thereby he derives the highest spiritual benefit unknown to the karmīs and jñānīs.