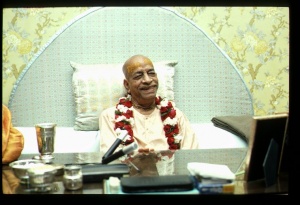 Knowing well that the age of Kali has already begun, we are assembled here in this holy place to hear at great length the transcendental message of Godhead and in this way perform sacrifice.

This age of Kali is not at all suitable for self-realization as was Satya-yuga, the golden age, or Tretā- or Dvāpara-yugas, the silver and copper ages. For self-realization, the people in Satya-yuga, living a lifetime of a hundred thousand years, were able to perform prolonged meditation. And in Tretā-yuga, when the duration of life was ten thousand years, self-realization was attained by performance of great sacrifice. And in the Dvāpara-yuga, when the duration of life was one thousand years, self-realization was attained by worship of the Lord. But in the Kali-yuga, the maximum duration of life being one hundred years only and that combined with various difficulties, the recommended process of self-realization is that of hearing and chanting of the holy name, fame, and pastimes of the Lord. The sages of Naimiṣāraṇya began this process in a place meant specifically for the devotees of the Lord. They prepared themselves to hear the pastimes of the Lord over a period of one thousand years. By the example of these sages one should learn that regular hearing and recitation of the Bhāgavatam is the only way for self-realization. Other attempts are simply a waste of time, for they do not give any tangible results. Lord Śrī Caitanya Mahāprabhu preached this system of Bhāgavata-dharma, and He recommended that all those who were born in India should take the responsibility of broadcasting the messages of Lord Śrī Kṛṣṇa, primarily the message of Bhagavad-gītā. And when one is well established in the teachings of Bhagavad-gītā, he can take up the study of Śrīmad-Bhāgavatam for further enlightenment in self-realization.