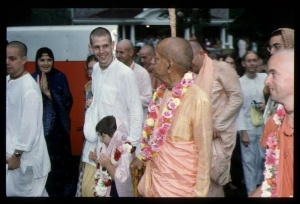 Śaunaka Muni asked: After killing his enemies who desired to usurp his rightful inheritance, how did the greatest of all religious men, Mahārāja Yudhiṣṭhira, assisted by his brothers, rule his subjects? Surely he could not freely enjoy his kingdom with unrestricted consciousness.

Mahārāja Yudhiṣṭhira was the greatest of all men of religion. Thus he was not at all inclined to fight with his cousins for the sake of enjoying the kingdom: he fought for the right cause because the kingdom of Hastināpura was his rightful inheritance and his cousins wanted to usurp it for themselves. He fought, therefore, for the right cause under the guidance of Lord Śrī Kṛṣṇa, but he could not enjoy the results of his victory because his cousins were all killed in the fight. He therefore ruled over the kingdom as a matter of duty, assisted by his younger brothers. The inquiry was important for Śaunaka Ṛṣi, who wanted to know about the behavior of Mahārāja Yudhiṣṭhira when he was at ease to enjoy the kingdom.