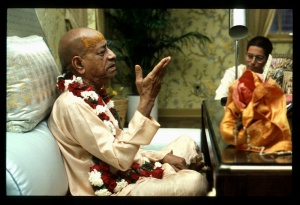 O Śaunaka, thereafter the Lord, having bade farewell to King Yudhiṣṭhira, Draupadī and other relatives, started for the city of Dvārakā, accompanied by Arjuna and other members of the Yadu dynasty.

Thus end the Bhaktivedanta purports of the First Canto, Twelfth Chapter, of the Śrīmad-Bhāgavatam, entitled "Birth of Emperor Parīkṣit."