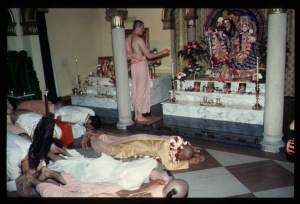 He is certainly a first-class man who awakens and understands, either by himself or from others, the falsity and misery of this material world and thus leaves home and depends fully on the Personality of Godhead residing within his heart.

There are three classes of transcendentalists, namely, (1) the dhīra, or the one who is not disturbed by being away from family association, (2) one in the renounced order of life, a sannyāsī by frustrated sentiment, and (3) a sincere devotee of the Lord, who awakens God consciousness by hearing and chanting and leaves home depending completely on the Personality of Godhead, who resides in his heart. The idea is that the renounced order of life, after a frustrated life of sentiment in the material world, may be the stepping stone on the path of self-realization, but real perfection of the path of liberation is attained when one is practiced to depend fully on the Supreme Personality of Godhead, who lives in everyone's heart as Paramātmā. One may live in the darkest jungle alone out of home, but a steadfast devotee knows very well that he is not alone. The Supreme Personality of Godhead is with him, and He can protect His sincere devotee in any awkward circumstance. One should therefore practice devotional service at home, hearing and chanting the holy name, quality, form, pastimes, entourage, etc., in association with pure devotees, and this practice will help one awaken God consciousness in proportion to one's sincerity of purpose. One who desires material benefit by such devotional activities can never depend on the Supreme Personality of Godhead, although He sits in everyone's heart. Nor does the Lord give any direction to persons who worship Him for material gain. Such materialistic devotees may be blessed by the Lord with material benefits, but they cannot reach the stage of the first-class human being, as above mentioned. There are many examples of such sincere devotees in the history of the world, especially in India, and they are our guides on the path of self-realization. Mahātmā Vidura is one such great devotee of the Lord, and we should all try to follow in his lotus footsteps for self-realization.