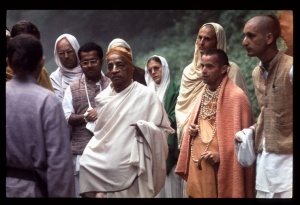 One who has controlled the sitting postures [the yogic āsanas] and the breathing process can turn the senses toward the Absolute Personality of Godhead and thus become immune to the contaminations of the modes of material nature, namely mundane goodness, passion and ignorance.

The preliminary activities of the way of yoga are āsana, prāṇāyāma, pratyāhāra, dhyāna, dhāraṇā, etc. Mahārāja Dhṛtarāṣṭra was to attain success in those preliminary actions because he was seated in a sanctified place and was concentrating upon one objective, namely the Supreme Personality of Godhead (Hari). Thus all his senses were being engaged in the service of the Lord. This process directly helps the devotee to get freedom from the contaminations of the three material modes of nature. Even the highest mode, the material mode of goodness, is also a cause of material bondage, and what to speak of the other qualities, namely passion and ignorance. Passion and ignorance increase the material propensities of hankering for material enjoyment, and a strong sense of lust provokes the accumulation of wealth and power. One who has conquered these two base mentalities and has raised himself to the platform of goodness, which is full of knowledge and morality, cannot also control the senses, namely the eyes, the tongue, the nose, the ear and touch. But one who has surrendered himself unto the lotus feet of Lord Hari, as above mentioned, can transcend all influences of the modes of material nature and be fixed in the service of the Lord. The bhakti-yoga process, therefore, directly applies the senses to the loving service of the Lord. This prohibits the performer from engaging in material activities. This process of turning the senses from material attachment to the loving transcendental service of the Lord is called pratyāhāra, and the very process is called prāṇāyāma, ultimately ending in samādhi, or absorption in pleasing the Supreme Lord Hari by all means.