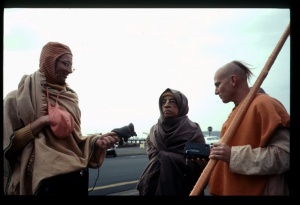 The Personality of Godhead, Lord Kṛṣṇa [Govinda], is the exclusive shelter for all great living beings, and His transcendental attributes cannot even be measured by such masters of mystic powers as Lord Śiva and Lord Brahmā. Can anyone who is expert in relishing nectar [rasa] ever be fully satiated by hearing topics about Him?

Lord Śiva and Lord Brahmā are two chiefs of the demigods. They are full of mystic powers. For example, Lord Śiva drank an ocean of poison of which one drop was sufficient to kill an ordinary living being. Similarly, Brahmā could create many powerful demigods, including Lord Śiva. So they are īśvaras, or lords of the universe. But they are not the supreme powerful. The supreme powerful is Govinda, Lord Kṛṣṇa. He is the Transcendence, and His transcendental attributes cannot be measured even by such powerful īśvaras as Śiva and Brahmā. Therefore Lord Kṛṣṇa is the exclusive shelter of the greatest of all living beings. Brahmā is counted amongst the living beings, but he is the greatest of all of us. And why is the greatest of all the living beings so much attached to the transcendental topics of Lord Kṛṣṇa? Because He is the reservoir of all enjoyment. Everyone wants to relish some kind of taste in everything, but one who is engaged in the transcendental loving service of the Lord can derive unlimited pleasure from such engagement. The Lord is unlimited, and His name, attributes, pastimes, entourage, variegatedness, etc. are unlimited, and those who relish them can do so unlimitedly and still not feel satiated. This fact is confirmed in the Padma Purāṇa:

There is no end to such transcendental discourses. In mundane affairs there is the law of satiation, but in transcendence there is no such satiation. Sūta Gosvāmī desired to continue the topics of Lord Kṛṣṇa before the sages of Naimiṣāraṇya, and the sages also expressed their readiness to hear from him continuously. Since the Lord is transcendence and His attributes are transcendental, such discourses increase the receptive mood of the purified audience.