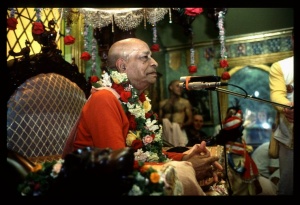 After all the ṛṣis and others had seated themselves comfortably, the King, humbly standing before them with folded hands, told them of his decision to fast until death.

Although the King had already decided to fast until death on the bank of the Ganges, he humbly expressed his decision to elicit the opinions of the great authorities present there. Any decision, however important, should be confirmed by some authority. That makes the matter perfect. This means that the monarchs who ruled the earth in those days were not irresponsible dictators. They scrupulously followed the authoritative decisions of the saints and sages in terms of Vedic injunction. Mahārāja Parīkṣit, as a perfect king, followed the principles by consulting the authorities, even up to the last days of his life.