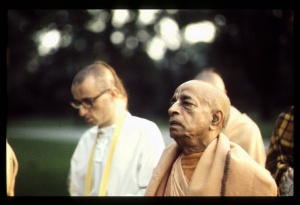 Again, offering obeisances unto all you brāhmaṇas, I pray that if I should again take my birth in the material world I will have complete attachment to the unlimited Lord Kṛṣṇa, association with His devotees and friendly relations with all living beings.