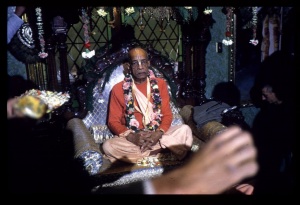 This form [the second manifestation of the puruṣa] is the source and indestructible seed of multifarious incarnations within the universe. From the particles and portions of this form, different living entities, like demigods, men and others, are created.

In different millennia there are different incarnations, and they are innumerable, although some of them are very prominent, such as Matsya, Kūrma, Varāha, Rāma, Nṛsiṁha, Vāmana and many others. These incarnations are called līlā incarnations. Then there are qualitative incarnations such as Brahmā, Viṣṇu, and Śiva (or Rudra) who take charge of the different modes of material nature.

Lord Viṣṇu is nondifferent from the Personality of Godhead. Lord Śiva is in the marginal position between the Personality of Godhead and the living entities, or jīvas. Brahmā is always a jīva-tattva. The highest pious living being, or the greatest devotee of the Lord, is empowered with the potency of the Lord for creation, and he is called Brahmā. His power is like the power of the sun reflected in valuable stones and jewels. When there is no such living being to take charge of the post of Brahmā, the Lord Himself becomes a Brahmā and takes charge of the post.

Lord Śiva is not an ordinary living being. He is the plenary portion of the Lord, but because Lord Śiva is in direct touch with material nature, he is not exactly in the same transcendental position as Lord Viṣṇu. The difference is like that between milk and curd. Curd is nothing but milk, and yet it cannot be used in place of milk.

The next incarnations are the Manus. Within one day's duration of the life of Brahmā (which is calculated by our solar year as 4,300,000 x 1,000 years) there are fourteen Manus. Therefore there are 420 Manus in one month of Brahmā and 5,040 Manus in one year of Brahmā. Brahmā lives for one hundred years of his age, and therefore there are 5,040 x 100 or 504,000 Manus in the duration of Brahmā's life. There are innumerable universes, with one Brahmā in each of them, and all of them are created and annihilated during the breathing time of the puruṣa. Therefore one can simply imagine how many millions of Manus there are during one breath of the puruṣa.