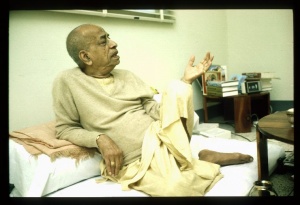 Knowledge of self-realization, even though free from all material affinity, does not look well if devoid of a conception of the Infallible [God]. What, then, is the use of fruitive activities, which are naturally painful from the very beginning and transient by nature, if they are not utilized for the devotional service of the Lord?

As referred to above, not only ordinary literatures devoid of the transcendental glorification of the Lord are condemned, but also Vedic literatures and speculation on the subject of impersonal Brahman when they are devoid of devotional service. When speculation on the impersonal Brahman is condemned on the above ground, then what to speak of ordinary fruitive work, which is not meant to fulfill the aim of devotional service. Such speculative knowledge and fruitive work cannot lead one to the goal of perfection. Fruitive work, in which almost all people in general are engaged, is always painful either in the beginning or at the end. It can be fruitful only when made subservient to the devotional service of the Lord. In the Bhagavad-gītā also it is confirmed that the result of such fruitive work may be offered for the service of the Lord, otherwise it leads to material bondage. The bona fide enjoyer of the fruitive work is the Personality of Godhead, and thus when it is engaged for the sense gratification of the living beings, it becomes an acute source of trouble.