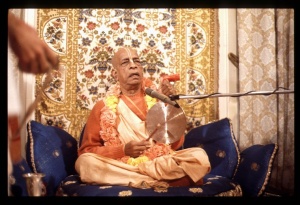 Learned circles have positively concluded that the infallible purpose of the advancement of knowledge, namely austerities, study of the Vedas, sacrifice, chanting of hymns and charity, culminates in the transcendental descriptions of the Lord, who is defined in choice poetry.

Human intellect is developed for advancement of learning in art, science, philosophy, physics, chemistry, psychology, economics, politics, etc. By culture of such knowledge the human society can attain perfection of life. This perfection of life culminates in the realization of the Supreme Being, Viṣṇu. The śruti therefore directs that those who are actually advanced in learning should aspire for the service of Lord Viṣṇu. Unfortunately persons who are enamored by the external beauty of viṣṇu-māyā do not understand that culmination of perfection or self-realization depends on Viṣṇu. Viṣṇu-māyā means sense enjoyment, which is transient and miserable. Those who are entrapped by viṣṇu-māyā utilize advancement of knowledge for sense enjoyment. Śrī Nārada Muni has explained that all paraphernalia of the cosmic universe is but an emanation from the Lord out of His different energies because the Lord has set in motion, by His inconceivable energy, the actions and reactions of the created manifestation. They have come to be out of His energy, they rest on His energy, and after annihilation they merge into Him. Nothing is, therefore, different from Him, but at the same time the Lord is always different from them.