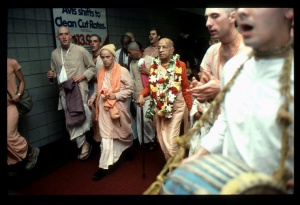 Man's activities in agriculture, mining, farming, industries, gardening, etc., were all on the same scale as they are now, even previous to the present creation, and the same activities will remain as they are, even in the next creation. After many hundreds of millions of years, one creation is started by the law of nature, and the history of the universe repeats itself practically in the same way. The mundane wranglers waste time with archaeological excavations without searching into the vital necessities of life. After getting an impetus in spiritual life, Śrī Nārada Muni, even though a mere child, did not waste time for a single moment with economic development, although he passed towns and villages, mines and industries. He continually went on to progressive spiritual emancipation. Śrīmad-Bhāgavatam is the repetition of history which happened some hundreds of millions of years ago. As it is said herein, only the most important factors of history are picked up to be recorded in this transcendental literature.