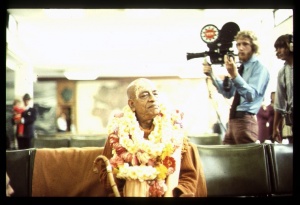 When Lord Brahmā returned after a moment of time had passed (according to his own measurement), he saw that although by human measurement a complete year had passed, Lord Kṛṣṇa, after all that time, was engaged just as before in playing with the boys and calves, who were His expansions.

Lord Brahmā had gone away for only a moment of his time, but when he returned, a year of human time had passed. On different planets, the calculation of time is different. To give an example, a man-made satellite may orbit the earth in an hour and twenty-five minutes and thus complete one full day, although a day ordinarily takes twenty-four hours for those living on earth. Therefore, what was but a moment for Brahmā was one year on earth. Kṛṣṇa continued to expand Himself in so many forms for one year, but by the arrangement of yogamāyā no one could understand this but Balarāma.

After one moment of Brahmā's calculation, Brahmā came back to see the fun caused by his stealing the boys and calves. But he was also afraid that he was playing with fire. Kṛṣṇa was his master, and he had played mischief for fun by taking away Kṛṣṇa's calves and boys. He was really anxious, so he did not stay away very long; he came back after a moment (of his calculation). When Brahmā returned, he saw that all the boys, calves and cows were playing with Kṛṣṇa in the same way as when he had come upon them; by Kṛṣṇa's display of yogamāyā, the same pastimes were going on without any change.

On the day when Lord Brahmā had first come, Baladeva could not go with Kṛṣṇa and the cowherd boys, for it was His birthday, and His mother had kept Him back for the proper ceremonial bath, called śāntika-snāna. Therefore Lord Baladeva was not taken by Brahmā at that time. Now, one year later, Brahmā returned, and because he returned on exactly the same day, Baladeva was again kept at home for His birthday. Therefore, although this verse mentions that Brahmā saw Kṛṣṇa and all the cowherd boys, Baladeva is not mentioned. It was five or six days earlier that Baladeva had inquired from Kṛṣṇa about the extraordinary affection of the cows and cowherd men, but now, when Brahmā returned, Brahmā saw all the calves and cowherd boys playing with Kṛṣṇa as expansions of Kṛṣṇa, but he did not see Baladeva. As in the previous year, Lord Baladeva did not go to the woods on the day Lord Brahmā appeared there.