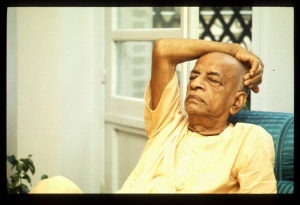 A similar number of boys and calves have been playing with Kṛṣṇa for one whole year, yet they are different from the ones illusioned by my mystic potency. Who are they? Where did they come from?

Although appearing like calves, cows and cowherd boys, these were all Viṣṇu. Actually they were viṣṇu-tattva, not jīva-tattva. Brahmā was surprised. "The original cowherd boys and cows," he thought, "are still where I put them last year. So who is it that is now keeping company with Kṛṣṇa exactly as before? Where have they come from?" Brahmā was surprised that his mystic power had been neglected. Without touching the original cows and cowherd boys kept by Brahmā, Kṛṣṇa had created another assembly of calves and boys, who were all expansions of viṣṇu-tattva. Thus Brahmā's mystic power was superseded.