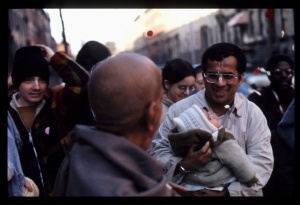 All beings, both moving and nonmoving, from the four-headed Lord Brahmā down to the most insignificant living entity, had taken forms and were differently worshiping those viṣṇu-mūrtis, according to their respective capacities, with various means of worship, such as dancing and singing.

Innumerable living entities are engaged in different types of worship of the Supreme, according to their abilities and karma, but everyone is engaged (jīvera 'svarūpa' haya-kṛṣṇera 'nitya-dāsa' (CC Madhya 20.108)); there is no one who is not serving. Therefore the mahā-bhāgavata, the topmost devotee, sees everyone as being engaged in the service of Kṛṣṇa; only himself does he see as not engaged. We have to elevate ourselves from a lower position to a higher position, and the topmost position is that of direct service in Vṛndāvana. But everyone is engaged in service. Denial of the service of the Lord is māyā.

"Only Kṛṣṇa is the supreme master, and all others are His servants. As Kṛṣṇa desires, everyone dances according to His tune.' (CC Adi 5.142)

There are two kinds of living entities-the moving and the nonmoving. Trees, for example, stand in one place, whereas ants move. Brahmā saw that all of them, down to the smallest creatures, had assumed different forms and were accordingly engaged in the service of Lord Viṣṇu.

All living entities are serving Kṛṣṇa in different ways, but when they are Kṛṣṇa conscious, their service is fully manifest. As a flower in the bud gradually fructifies and yields its desired aroma and beauty, so when a living entity comes to the platform of Kṛṣṇa consciousness, the beauty of his real form comes into full blossom. That is the ultimate beauty and the ultimate fulfillment of desire.