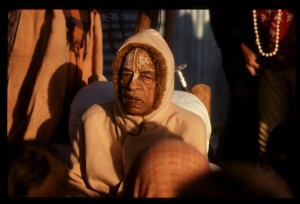 Have You not shown me today that both You Yourself and everything within this creation are manifestations of Your inconceivable potency? First You appeared alone, and then You manifested Yourself as all of Vṛndāvana's calves and cowherd boys, Your friends. Next You appeared as an equal number of four-handed Viṣṇu forms, who were worshiped by all living beings, including me, and after that You appeared as an equal number of complete universes. Finally, You have now returned to Your unlimited form as the Supreme Absolute Truth, one without a second.

As stated in the Vedic literature, sarvaṁ khalv idaṁ brahma: everything that exists is an expansion of the Supreme Personality of Godhead. Thus everything is ultimately part and parcel of the Lord's spiritual existence. By Lord Kṛṣṇa's causeless mercy, Lord Brahmā personally experienced that all existence, being the potency of God, is nondifferent from Him.