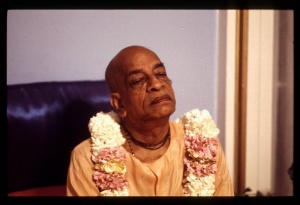 You are the one Supreme Soul, the primeval Supreme Personality, the Absolute Truth—self-manifested, endless and beginningless. You are eternal and infallible, perfect and complete, without any rival and free from all material designations. Your happiness can never be obstructed, nor have You any connection with material contamination. Indeed, You are the indestructible nectar of immortality.

Similarly, the word pūrṇa, meaning "full and complete," refutes the concept that Lord Kṛṣṇa could grow, since He is ever-existing in fullness. When one's material body becomes mature, one can no longer enjoy as in youth; but the words ajasra-sukha, "enjoying unobstructed happiness," indicate that Lord Kṛṣṇa's body never reaches so-called middle age, since it is always full of spiritual youthful bliss. The word akṣara, "undiminishing," refutes the possibility that Lord Kṛṣṇa's body grows old or declines, and the word amṛta, "immortal" negates the possibility of death.

In other words, Lord Kṛṣṇa's transcendental body is free from the transformations of material bodies. The Lord does, however, create innumerable worlds and expand Himself as innumerable living entities. But the Lord's so-called reproduction is completely spiritual and does not take place at a certain phase of bodily existence; rather, it constitutes the Lord's eternal proclivity to expand His spiritual bliss and glories.

As the Lord states in śruti, pūrvam evāham ihāsam: "I alone existed in the beginning." Therefore here the Lord is called puruṣaḥ purāṇaḥ, "the primeval enjoyer. "This original puruṣa expands Himself as the Supersoul and enters every living being. Still, He is ultimately the Absolute Truth, Kṛṣṇa, as stated in the Gopāla-tāpanī Upaniṣad: yaḥ sākṣāt para-brahmeti govindaṁ sac-cid-ānanda-vigrahaṁ vṛndāvana-sura-bhūruha-talāsīnam. "The Absolute Truth Himself is Govinda, who has an eternal form of bliss and knowledge and who is sitting beneath the shady desire trees of Vṛndāvana." This Absolute Truth is beyond material ignorance and beyond even ordinary spiritual knowledge, as stated in the same Gopāla-tāpanī śruti: vidyāvidyābhyāṁ bhinnaḥ. Thus, in many ways the supremacy of Lord Kṛṣṇa has been established in the Vedic literature, and it is here confirmed by Lord Brahmā himself.