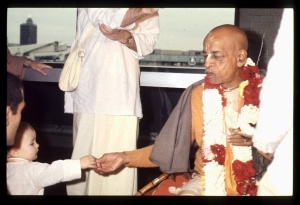 Just see the foolishness of those ignorant persons who consider You to be some separated manifestation of illusion and who consider the self, which is actually You, to be something else, the material body. Such fools conclude that the supreme soul is to be searched for somewhere outside Your supreme personality.

Lord Brahmā is amazed at the gross ignorance of conditioned souls who consider Lord Kṛṣṇa's supreme spiritual body to be material. Ignorant of the spiritual form of the Lord, such persons also consider their own material bodies to be the self, and therefore they conclude that spiritual reality is to be found somewhere beyond the supreme personality of Lord Kṛṣṇa. Sometimes such fools consider Lord Kṛṣṇa to be one of many individual souls who together constitute a single impersonal spiritual entity. Unfortunately, such speculators are not inclined to hear from the Lord Himself or from the Lord's authorized representatives, such as Lord Brahmā. Because they whimsically speculate on the nature of the Supreme, their ultimate result is confusion and ignorance, which they euphemistically describe as "the mystery of life."