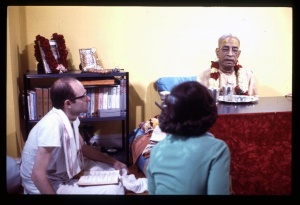 For this reason, O best of kings, the embodied soul is self-centered: he is more attached to his own body and self than to his so-called possessions like children, wealth and home.

It is now common practice all over the world for a mother to kill her own child within the womb if the birth of that child represents any inconvenience for her. Similarly, grown children eagerly place their elderly parents in lonely institutions rather than be inconvenienced by their presence at home. These and innumerable other examples prove that people in general are more attached to their own body and self, which represent "I-ness," than to their family and other possessions, which represent "my-ness." Although conditioned souls are very proud of their so-called love for society, family and so forth, in reality every conditioned soul is acting on the platform of gross or subtle selfishness.