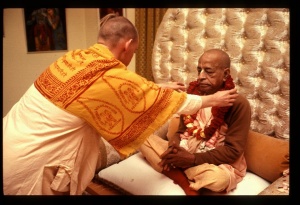 When the cowherd boys saw that they had been saved from the forest fire by the Lord's mystic power, which is manifested by His internal potency, they began to think that Kṛṣṇa must be a demigod.

The cowherd boys of Vṛndāvana simply loved Kṛṣṇa as their only friend and exclusive object of devotion. To increase their ecstasy, Kṛṣṇa displayed to them His mystic potency and saved them from a terrible forest fire.

The cowherd boys could never give up their ecstatic loving friendship with Kṛṣṇa. Therefore, rather than considering Kṛṣṇa to be God, after they saw His extraordinary power they thought that perhaps He was a demigod. But since Lord Kṛṣṇa was their beloved friend, they were on the same level with Him, and thus they thought that they too must be demigods. In this way Kṛṣṇa's cowherd friends became overwhelmed with ecstasy.