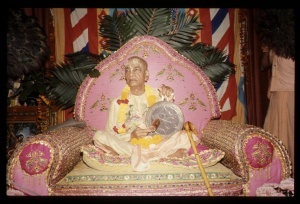 O friend, Vṛndāvana is spreading the glory of the earth, having obtained the treasure of the lotus feet of Kṛṣṇa, the son of Devakī. The peacocks dance madly when they hear Govinda's flute, and when other creatures see them from the hilltops, they all become stunned.

Śrīla Śrīdhara Svāmī explains that because activities such as those described in this verse do not occur in any other world, the earth is unique. In fact, the earth's glories are being spread by wonderful Vṛndāvana because it is the place of Kṛṣṇa's pastimes.

Śrīla Viśvanātha Cakravartī Ṭhākura explains kṛṣṇa-līlā as follows: "In Vṛndāvana, the peacocks request Kṛṣṇa, 'Govinda, please make us dance.' Thus Kṛṣṇa plays His flute, and they surround Him in a circle and dance in time with the rhythm of His melody. And while standing in the midst of their dancing, He also sings and dances. Then those peacocks, who are fully satisfied with His musical performance, out of gratitude offer for His pleasure their own divine feathers. In the usual manner of musical performers, Kṛṣṇa gladly accepts these presentations and places a feather upon the turban atop His head. Gentle animals such as deer and doves greatly relish the transcendental entertainment presented by Kṛṣṇa, and to get a good view they flock to the peaks of hills. Then, as they watch the breathtaking program, they become stunned in ecstasy."

Śrīla Sanātana Gosvāmī comments that because in Vṛndāvana Kṛṣṇa goes barefoot and can thus directly mark the earth with the symbols of His lotus feet, that transcendental land is even more glorious than Vaikuṇṭha, where Viṣṇu wears slippers.