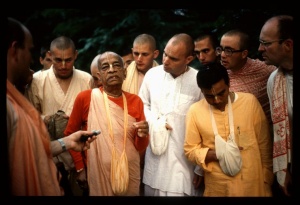 One day they came to the riverbank and, putting aside their clothing as they had done before, happily played in the water while singing the glories of Kṛṣṇa.

According to Śrīla Viśvanātha Cakravartī Ṭhākura, this incident occurred on the day the young gopīs completed their vow, which was a full-moon day. To celebrate the successful completion of their vow, the girls invited young Rādhārāṇī—the daughter of Vṛṣabhānu and the special object of their affection—along with other important gopīs, and brought them all to the river to bathe. Their playing in the water was meant to serve as the avabhṛtha-snāna, the ceremonial bath taken immediately upon the completion of a Vedic sacrifice.

Śrīla Prabhupāda comments as follows: "It is an old system among Indian girls and women that when they take bath in the river they place their garments on the bank and dip into the water completely naked. The portion of the river where the girls and women take bath was strictly prohibited to any male, and this is still the system. The Supreme Personality of Godhead, knowing the minds of the unmarried young gopīs, awarded them their desired objective. They had prayed for Kṛṣṇa to become their husband, and Kṛṣṇa wanted to fulfill their desires."