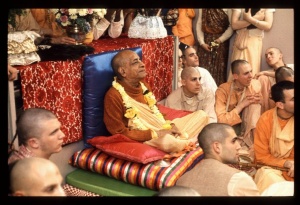 [Lord Kṛṣṇa thought:] Certainly people in this world are wandering among higher and lower destinations, which they achieve through activities performed according to their desires and without full knowledge. Thus people do not know their real destination.

Śrīla Jīva Gosvāmī has elaborately explained how this verse applies to the eternally liberated residents of Śrī Vṛndāvana, the Lord's abode. One of the fundamental philosophical principles of the Śrīmad-Bhāgavatam is the distinction between two types of illusion, Yoga-māyā and Mahā-māyā, the spiritual and material states of existence, respectively. Although Kṛṣṇa is God, the omnipotent, omniscient Supreme Being, His intimate associates in the spiritual world love Him so much that they see Him as their beloved child, friend, lover and so on. So that their ecstatic love can transcend the boundaries of mere reverence, they forget that Kṛṣṇa is the Supreme God of all the universes, and thus their pure, intimate love expands unlimitedly. One may consider their activities of treating Kṛṣṇa as a helpless child, a handsome boyfriend, or a playmate to be a manifestation of avidyā, ignorance of Lord Kṛṣṇa's position as God, but the residents of Vṛndāvana are in fact ignoring the secondary majesty of Kṛṣṇa and focusing intensely on His infinite beauty, which is the essence of His existence.

In fact, describing Lord Kṛṣṇa as the supreme controller and God is almost a type of political analysis, referring as it does to a hierarchy of power and control. Such analysis of levels of power and hierarchies of rule is significant in a context in which one entity is not fully surrendered, in love, to a higher entity. In other words, control becomes visible, or is consciously felt as control, when there is resistance to that control. To cite a simple example: A pious, law-abiding citizen sees a policeman as a friend and well-wisher, whereas a criminal sees him as a threatening symbol of punishment. Those who are enthusiastic about government policies feel not that the government is controlling them but rather that it is helping them.

Thus Lord Kṛṣṇa is seen as a "controller," and hence as "the Supreme God," by those who are not fully enchanted by His beauty and pastimes. Those fully in love with Lord Kṛṣṇa focus on His sublime, attractive features and, because of the nature of their relationship with Him, do not much notice His controlling power.

A simple proof that the residents of Vraja have transcended lower states of God consciousness rather than failed to attain them is the fact that throughout the pastimes of the Lord they often "remember" that Kṛṣṇa is God. Usually they are astonished at this remembrance, having been fully absorbed in seeing Kṛṣṇa as their friend, lover and so on.

It should be remembered that the entire purpose of Kṛṣṇa's descent into this world is to attract living beings back home, back to Godhead. Two things are required for this: that His pastimes display the beauty of spiritual perfection, and that they somehow seem relevant and hence interesting to the conditioned souls of this world. The Bhāgavatam often states that Lord Kṛṣṇa plays just like a youthful actor, and He undoubtedly engages His eternal devotees in the dramatic presentation. Thus Lord Kṛṣṇa here muses to Himself that people in this world certainly do not know their ultimate destination, and with an obvious touch of the facetious He also thinks in this way about His own eternally liberated associates, who were playing in this world like ordinary members of a cowherd village.

Apart from the double meaning obviously present in this verse when it is applied to Kṛṣṇa's liberated associates, Kṛṣṇa here makes an entirely direct and pointedly critical observation about ordinary people. When applied to conditioned souls who are actually wandering throughout the universe, His statement that people are acting out of ignorance and lust is not mitigated by any deeper, spiritual meaning. People in general are simply ignorant, and they do not seriously consider their ultimate destination. As usual, Lord Śrī Kṛṣṇa is able to say many profound and complex things in a few simple words. How fortunate we are that God is not a dry field of energy, a transcendent, effulgent blob, or nothing at all—as various people would have it. In fact, He is the most wonderful Personality of Godhead, full of absolute personal qualities, and certainly whatever we can do, He can do better, as evidenced by His brilliant way of speaking.