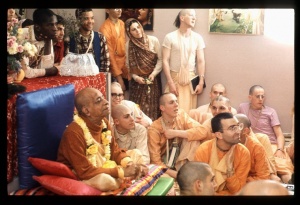 Śrī Bādarāyaṇi said: Śrī Kṛṣṇa is the Supreme Personality of Godhead, full in all opulences, yet upon seeing those autumn nights scented with blossoming jasmine flowers, He turned His mind toward loving affairs. To fulfill His purposes He employed His internal potency.

As we begin the famous narration of Lord Kṛṣṇa's rāsa dance, a dance of love with beautiful young girls, questions will inevitably arise in the minds of ordinary people regarding the propriety of God's romantic dancing with many young girls in the middle of a full-moon autumn night. In his description of the Lord's rāsa dance in Kṛṣṇa, the Supreme Personality of Godhead, Śrīla Prabhupāda painstakingly explains the spiritual purity of these transcendental activities. Those advanced in the science of Kṛṣṇa—the great teachers, or ācāryas—leave no doubt that Lord Kṛṣṇa is full and satisfied in Himself, free of all material desire, which is, after all, a sense of incompleteness or lack.

Materialistic persons and impersonal philosophers stubbornly reject the bona fide explanation of Śrī Kṛṣṇa's transcendental nature. There is no reason to deny the beautiful reality of an absolute person able to perform absolute romantic activities, of which our so-called romance is merely a shadow or perverted reflection. The irrational insistence that material activities cannot be a reflection of the perfect, spiritual activities performed by God reflects the unimaginative emotional disposition of those who oppose the reality of Śrī Kṛṣṇa. This psychological disposition of the nondevotees, which leads them to fervently deny the very existence of the absolute person, unfortunately boils down to what may be succinctly described as envy, since the overwhelming majority of the impersonal critics eagerly pursue their own romantic affairs, which they consider quite real and even "spiritual."

The actual supreme lover is Lord Kṛṣṇa. The Vedānta-sūtra begins by declaring that the Absolute Truth is the source of everything, and even Western philosophy was born in a somewhat awkward attempt at finding the original One behind the apparent many of material existence. Conjugal love, one of the most intense and demanding aspects of human existence, can hardly have nothing at all to do with supreme reality.

In fact, the conjugal love experienced by human beings is a mere reflection of spiritual reality, in which the same love exists in an absolute, pristine state. Thus it is clearly stated here that when Kṛṣṇa decided to enjoy the romantic atmosphere of autumn, "He resorted to His spiritual potency" (yoga-māyām upāśritaḥ). The spiritual nature of Lord Kṛṣṇa's conjugal affairs is a major theme in this section of the Śrīmad-Bhāgavatam.

A woman is attractive because of the sweet sound of her voice, her beauty and gentleness, her enchanting fragrance and tenderness, and also because of her cleverness and skill in music and dance. The most attractive ladies of all are the young gopīs of Vṛndāvana, who are Lord Kṛṣṇa's internal potency, and this chapter tells how He enjoyed their brilliant feminine qualities—even though, as Śrīla Viśvanātha Cakravartī Ṭhākura has mentioned, Lord Kṛṣṇa was an eight-year-old boy when these events took place.

Ordinary people prefer God simply to be a witness of their romantic affairs. When a boy desires a girl or a girl desires a boy, sometimes they pray to God for their enjoyment. Such people are shocked and dismayed to find out that the Lord can enjoy His own loving affairs with His own transcendental senses. In truth, Śrī Kṛṣṇa is the original Cupid, and His exciting conjugal pastimes will be described in this section of the Bhāgavatam.

When Lord Kṛṣṇa descends to the earth, His spiritual body seems to take birth and grow as He displays His variegated pastimes. The Lord could hardly allow His boyhood to pass without exhibiting the supreme loving affairs between a young boy and young girls. Thus Viśvanātha Cakravartī Ṭhākura quotes Śrīla Rūpa Gosvāmī as follows: kaiśoraṁ saphalī-karoti kalayan kuñje vihāraṁ hariḥ. "Lord Hari perfects His youth by arranging loving pastimes in the groves of the Vṛndāvana forest."