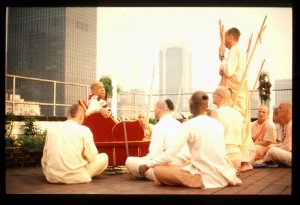 After speaking to Kaṁsa in this way, the goddess Durgā, Yogamāyā, appeared in different places, such as Vārāṇasī, and became celebrated by different names, such as Annapūrṇā, Durgā, Kālī and Bhadrā.

The goddess Durgā is celebrated in Calcutta as Kālī, in Bombay as Mumbādevī, in Vārāṇasī as Annapūrṇā, in Cuttack as Bhadrakālī and in Ahmedabad as Bhadrā. Thus in different places she is known by different names. Her devotees are known as śāktas, or worshipers of the energy of the Supreme Personality of Godhead, whereas worshipers of the Supreme Personality of Godhead Himself are called Vaiṣṇavas. Vaiṣṇavas are destined to return home, back to Godhead, in the spiritual world, whereas the śāktas are destined to live within this material world to enjoy different types of material happiness. In the material world, the living entity must accept different types of bodies. Bhrāmayan sarva-bhūtāni yantrārūḍhāni māyayā (BG 18.61). According to the living entity's desire, Yogamāyā, or Māyā, the goddess Durgā, gives him a particular type of body, which is mentioned as yantra, a machine. But the living entities who are promoted to the spiritual world do not return to the prison house of a material body (tyaktvā dehaṁ punar janma naiti mām eti so'rjuna (BG 4.9)). The words janma na eti indicate that these living entities remain in their original, spiritual bodies to enjoy the company of the Supreme Personality of Godhead in the transcendental abodes Vaikuṇṭha and Vṛndāvana.