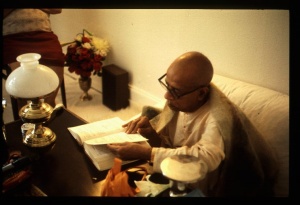 Surcharged with passion and ignorance and not knowing what was good or bad for them, the asuras, for whom impending death was waiting, began the persecution of the saintly persons.

"As the embodied soul continually passes, in this body, from boyhood to youth to old age, the soul similarly passes into another body at death. The self-realized soul is not bewildered by such a change." Irresponsible persons, surcharged with passion and ignorance, foolishly do things that are not to be done (nūnaṁ pramattaḥ kurute vikarma (SB 5.5.4)). But one should know the results of irresponsible actions, as explained in the next verse.