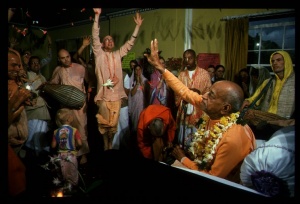 The child, Yogamāyā-devī, the younger sister of Lord Viṣṇu, slipped upward from Kaṁsa's hands and appeared in the sky as Devī, the goddess Durgā, with eight arms, completely equipped with weapons.

Kaṁsa tried to dash the child downward against a piece of stone, but since she was Yogamāyā, the younger sister of Lord Viṣṇu, she slipped upward and assumed the form of the goddess Durgā. The word anujā, meaning "the younger sister," is significant. When Viṣṇu, or Kṛṣṇa, took birth from Devakī, He must have simultaneously taken birth from Yaśodā also. Otherwise how could Yogamāyā have been anujā, the Lord's younger sister?