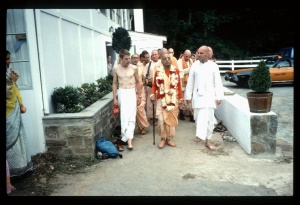 How amazing it is that these simple women who wander about the forest, seemingly spoiled by improper behavior, have achieved the perfection of unalloyed love for Kṛṣṇa, the Supreme Soul! Still, it is true that the Supreme Lord Himself awards His blessings even to an ignorant worshiper, just as the best medicine works even when taken by a person ignorant of its ingredients.

The use of the word kva in the first two lines indicates a sharp contrast between apparently incompatible items, in this case the apparently insignificant and even impure position of the gopīs, mentioned in the first line, and their attainment of the highest perfection of life, mentioned in the second. In this regard Śrīla Viśvanātha Cakravartī describes three types of adulterous women. The first is a woman who enjoys both her husband and a lover, being faithful to neither. Both ordinary society and the scriptures condemn this conduct. The second type of adulterous woman is she who abandons her husband to enjoy only with her lover. Society and the scriptures also condemn this behavior, although such a fallen woman may be said to at least have the good quality of dedicating herself to a single man. The last kind of adulterous woman is she who abandons her husband and enjoys in the attitude of being a lover of the Supreme Lord alone. Śrīla Viśvanātha Cakravartī explains that although foolish, common people criticize this position, such behavior is commended by those who are wise in spiritual science. Therefore learned members of society and the revealed scriptures praise such single-minded devotion to the Lord. Such was the gopīs behavior. Thus the term vyabhicāra-duṣṭāḥ, "corrupted by deviation," indicates the apparent resemblance between the gopīs behavior and that of ordinary adulterous women.