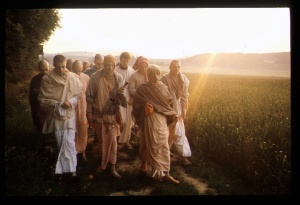 Lord Varuṇa offered horses as swift as the mind, some of which were pure dark-blue, others white. The treasurer of the demigods, Kuvera, gave his eight mystic treasures, and the rulers of various planets each presented their own opulences.

Śrīla Śrīdhara Svāmī comments as follows on this verse: "The master of the treasury is Kuvera, and the eight treasures are his nidhis. These are described as follows: