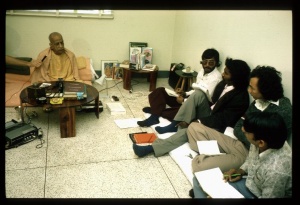 To secure the bride for Śiśupāla, the kings who envied Kṛṣṇa and Balarāma came to the following decision among themselves: "If Kṛṣṇa comes here with Balarāma and the other Yadus to steal the bride, we shall band together and fight Him." Thus those envious kings went to the wedding with their entire armies and a full complement of military conveyances.

The word saṁhatāḥ, which normally means "bound tightly together," may also mean "thoroughly struck down" or "killed." Thus although Kṛṣṇa's enemies thought they were unified and strong—saṁhatāḥ in the former sense—they could not successfully oppose the Personality of Godhead, and consequently they would be struck down and killed—saṁhatāḥ in the latter sense.