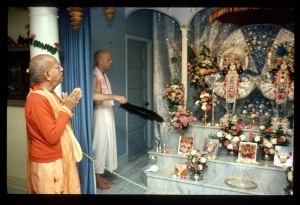 A woman who fails to relish the fragrance of the honey of Your lotus feet becomes totally befooled, and thus she accepts as her husband or lover a living corpse covered with skin, whiskers, nails, head-hair and body-hair and filled with flesh, bones, blood, parasites, feces, mucus, bile and air.

Here Lord Kṛṣṇa's chaste wife makes a quite unequivocal statement about material sense gratification based on the physical body. Śrīla Viśvanātha Cakravartī comments as follows on this verse: On the authority of the statement sa vai patiḥ syād akuto-bhayaḥ svayam — "He indeed should become one's husband who can remove all fear"—Śrī Kṛṣṇa is the real husband for all women at all times. Thus a woman who worships someone else as her husband simply worships a dead body.

Śrīla Viśvanātha Cakravartī comments further: Rukmiṇī thus considered that although the sweetness of Lord Kṛṣṇa's lotus feet is well known, and although He possesses an eternal body full of knowledge and bliss, foolish women reject Him. An ordinary husband's body is covered on the outside by skin and hair; otherwise, being filled with blood, feces, flesh, bile and so on, it would be overwhelmed with flies and other vermin attracted by its bad smell and other offensive qualities.