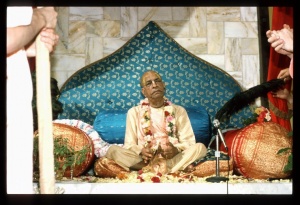 Lord Rudra, accompanied by his son Kārtikeya and the Pramathas, came riding on Nandi, his bull carrier, to fight Balarāma and Kṛṣṇa on Bāṇa's behalf.

Śrīla Śrīdhara Svāmī states that the word bhagavān is used here to indicate that Lord Śiva is by nature all-knowing and thus well aware of Lord Kṛṣṇa's greatness. Still, although Śiva knew Lord Kṛṣṇa would defeat him, he joined the battle against Him to demonstrate the glories of the Supreme Personality of Godhead. Śrīla Viśvanātha Cakravartī Ṭhākura states that Lord Śiva entered the battle for two reasons: first, to increase Lord Kṛṣṇa's pleasure and enthusiasm; and second, to demonstrate that the Lord's incarnation as Kṛṣṇa, although enacting humanlike pastimes, is superior to other avatāras, such as Lord Rāmacandra. Śrīla Viśvanātha Cakravartī further states in this regard that Yogamāyā, Lord Kṛṣṇa's internal potency, bewildered Lord Śiva just as she had bewildered Brahmā. In support of this statement, the ācārya cites the phrase brahma-rudrādi-mohanam from Bhakti-rasāmṛta-sindhu. Of course, Yogamāyā's job is to make fine arrangements for the Lord's pastimes, and thus Śiva became enthusiastic to battle the Supreme Lord, Kṛṣṇa.