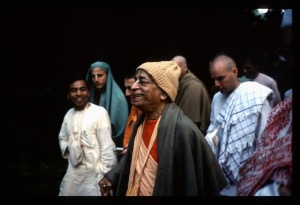 The utensils used in the sacrifice were made of gold, just as in the ancient Rājasūya performed by Lord Varuṇa. Indra, Brahmā, Śiva and many other planetary rulers; the Siddhas and Gandharvas with their entourage; the Vidyādharas; great serpents; sages; Yakṣas; Rākṣasas; celestial birds; Kinnaras; Cāraṇas; and earthly kings—all were invited, and indeed they all came from every direction to the Rājasūya sacrifice of King Yudhiṣṭhira, the son of Pāṇḍu. They were not in the least astonished to see the opulence of the sacrifice, since it was quite appropriate for a devotee of Lord Kṛṣṇa.

Mahārāja Yudhiṣṭhira was universally famous as a great devotee of Lord Kṛṣṇa, and thus nothing was impossible for him.