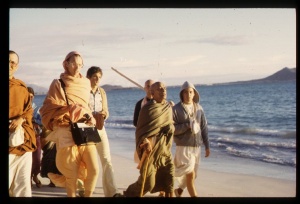 The members of the assembly then pondered over who among them should be worshiped first, but since there were many personalities qualified for this honor, they were unable to decide. Finally Sahadeva spoke up.

Śrīla Prabhupāda writes, "Another important procedure is that the most exalted personality in the assembly of such a sacrificial ceremony is first offered worship.... This particular ceremony is called agra-pūjā. Agra means 'first,' and pūjā means 'worship.' This agra-pūjā is similar to the election of a president. In the sacrificial assembly, all the members were very exalted. Some proposed to elect one person as the perfect candidate for accepting agra-pūjā, and others proposed someone else.

As the great ācārya Jīva Gosvāmī points out, Text 15 of this chapter states that the members of the assembly were not astonished at the opulence of the sacrifice, since they knew that King Yudhiṣṭhira was a devotee of Lord Kṛṣṇa. Still, Text 18 now states that the assembly could not select the most deserving candidate for being worshiped first. This indicates that many of the brāhmaṇas present were not fully realized transcendentalists but rather conventional brāhmaṇas uncertain of the supreme conclusion of Vedic wisdom.

Similarly, Ācārya Viśvanātha comments that the undecided members of the assembly were the less intelligent ones, and not such exalted personalities as Brahmā, Śiva and Dvaipāyana Vyāsadeva, who thought, "Since today no one is asking our opinion, why should we say anything? Furthermore, here is Sahadeva, who is renowned for his sharp skill in analyzing all sorts of circumstances. He can help appoint the person who is to be worshiped first. Only if he somehow fails to speak or cannot understand the situation will we speak up, despite no one's having inquired from us." Having made up their minds in this way, the greatest personalities remained silent. This is how Viśvanātha Cakravartī advises us to understand what occurred in the assembly.