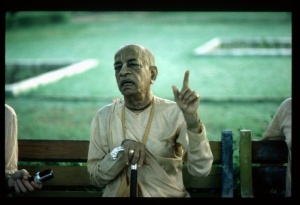 O eternally liberated, transcendental Lord, Your material energy causes the various moving and nonmoving species of life to appear by activating their material desires, but only when and if You sport with her by briefly glancing at her. You, the Supreme Personality of Godhead, see no one as an intimate friend and no one as a stranger, just as the ethereal sky has no connection with perceptible qualities. In this sense You resemble a void.

Not only are living beings totally dependent on the all-powerful, independent Lord for their maintenance and welfare, but even the very fact of their embodied existence is due only to His exceptional mercy. The Personality of Godhead has no interest in material affairs, since He has nothing to gain from the petty pleasures of this world and is altogether free from any contamination of envy or lust. He is exclusively involved in confidential, loving pastimes with His pure devotees in the internal realm of His spiritual energies. Therefore the only reason He ever turns to the business of material creation is to help draw lost souls back into this inner circle of eternal enjoyment.

To attempt a life separate from the Lord, rebellious souls must be provided with suitable bodies and an illusory environment in which to act out their fantasies of independence. The merciful Lord agrees to let them learn in their own way, and so He glances at Mahā-Māyā, His energy of material creation. Simply by this glance, she is awakened and makes all required arrangements on His behalf. She and her helpers manufacture countless varieties of gross and subtle bodies of demigods, humans, animals and so on, along with countless situations in heavenly and hellish worlds—all just to give the conditioned souls the exact facilities they desire and deserve.

While the uninformed may blame God for the suffering of His creatures, a sincere student of the Vedic literature will come to appreciate the Supreme Lord's equal concern for each soul. Since He has nothing to lose or gain, there is no reason for Him to distinguish between friends and opponents. We may choose to oppose Him and make all endeavors to forget Him, but He never forgets us, nor does He ever stop providing us with all our necessities, along with His unseen guidance.

"O Father, O Lord appearing as half man, half lion, please save those who have been born into the endless cycle of birth and death. These souls are distressed by their karmic entanglement, which Māyā awakened when Your glance excited her to activity."