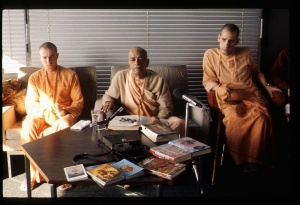 It may be proposed that this world is permanently real because it is generated from the permanent reality, but such an argument is subject to logical refutation. Sometimes, indeed, the apparent nondifference of a cause and its effect fails to prove true, and at other times the product of something real is illusory. Furthermore, this world cannot be permanently real, for it partakes of the natures of not only the absolute reality but also the illusion disguising that reality. Actually, the visible forms of this world are just an imaginary arrangement resorted to by a succession of ignorant persons in order to facilitate their material affairs. With their various meanings and implications, the learned words of Your Vedas bewilder all persons whose minds have been dulled by hearing the incantations of sacrificial rituals.

According to Śrīla Viśvanātha Cakravartī Ṭhākura, the Upaniṣads teach that this created world is real but temporary. This is the understanding that devotees of Lord Viṣṇu adhere to. But there are also materialistic philosophers, like the proponents of Jaimini Ṛṣi's Karma mīmāṁsā, who claim that this world is the only reality and exists eternally. For Jaimini, the cycle of karmic action and reaction is perpetual, with no possibility of liberation into a different, transcendental realm. This viewpoint, however, is shown to be fallacious by a careful examination of the Upaniṣadic mantras, which contain many descriptions of a higher, spiritual existence. For example, sad eva saumyedam agra āsīd ekam evādvitīyam: "My dear boy, the Absolute Truth alone existed prior to this creation, one without a second." (Chāndogya Upaniṣad 6.2.1) Also, vijñānam ānandaṁ brahma: "The supreme reality is divine knowledge and bliss." (Bṛhad-āraṇyaka Upaniṣad 3.9.34)

In this prayer of the personified Vedas, the materialists' argument is summed up in the words sata idam utthitaṁ sat: "The visible world is permanently real because it is generated from the permanent reality." In general, this argument goes, that which is produced from a certain thing is composed of that thing. For example, earrings and other ornaments made from gold share gold's substance. Thus, the Mīmāṁsā logicians conclude, since the world as we know it is a manifestation of an eternal reality, it is also eternally real. But the Sanskrit ablative expression sataḥ, "from the eternal reality," implies a definite separation of cause and effect. Therefore, what is created from sat, the permanent reality, must be significantly different from it—in other words, temporary. In this way the argument of the materialists is flawed because it proves just the opposite of what it is intended to prove (tarka-hatam), namely that the world as we know it is all that exists, that it is eternal, and that there is no separate, transcendental reality.

In defense, the Mīmāṁsakas may claim that they are not trying to prove nondifference per se, but rather trying to disprove the possibility of difference, or in other words, the possibility of any reality separate from the known world. This attempt to support the Mīmāṁsā argument is easily refuted by the phrase vyabhicarati kva ca: that is to say, there are counterexamples that deviate from the general rule. Sometimes, indeed, the source is very different from what it produces, as in the case of a man and his young son, or of a hammer and the destruction of a clay pot.

But, the Mīmāṁsakas reply, the creation of the universe is not the same kind of causation as your counterexamples: the father and the hammer are only efficient causes, whereas the sat is also this universe's ingredient cause. This reply is anticipated by the words kva ca mṛṣā ("and sometimes the effect is illusory"). In the case of the false perception of a snake where there is a rope on the ground, the rope is the snake—illusion's ingredient cause, differing in many respects from the imagined snake, most obviously in its being real.

The Mīmāṁsakas once more rejoin: But the ingredient cause of the illusory snake is not just the rope by itself: it is the rope plus the observer's ignorance (avidyā). Since avidyā is not a substance, the snake it produces is called an illusion. Yet the same is true, the personified Vedas reply, in the case of the universe's creation from sat in conjunction with ignorance (tathobhaya-yuk); here the unreal element of illusion, Māyā, is the living beings' misconception that their own bodies and other changing material forms are permanent.

But, rejoin the Mīmāṁsakas, our experience of this world is valid because the things we experience are useful for practical activity. If our experience were not valid, we could never be sure that our perceptions corresponded to the facts. We would be like a man who, despite exhaustive examination, would still have to suspect that a rope might be a snake. No, the śrutis here answer, the temporary configurations of matter are nonetheless an illusory imitation of the eternal spiritual reality, cleverly concocted to fulfill the conditioned living entities' desire for material activity (vyavahṛtaye vikalpa iṣitaḥ). The illusion of this world's permanence is sustained by a succession of blind men who learn the materialistic idea from their predecessors and pass on this illusion to their descendants. Anyone can see that an illusion often continues by the momentum of lingering mental impressions, even when its basis is no longer present. Thus throughout history blind philosophers have misled other blind men by convincing them of the absurd idea that they can reach perfection by engaging in mundane rituals. Foolish people may be willing to exchange counterfeit coins among one another, but a wise man knows that such money is useless for the practical business of buying food, medicine and other necessities. And if given in charity, counterfeit money will earn no pious credit.

But, say the Mīmāṁsakas, how can the sincere performer of Vedic rituals be a deluded fool, since the Saṁhitās and Brāhmaṇas of the Vedic scriptures establish that the fruits of karma are eternal? For example, akṣayyaṁ ha vai cāturmāsya-yājinaḥ su-kṛtaṁ bhavati: "For one who observes the Cāturmāsya vows there arises inexhaustible good karma," and apāma somam amṛta babhūma: "We have drunk the soma and become immortal." (Ṛg Veda 8.43.3)

The śrutis reply by pointing out that the Personality of Godhead's learned words, comprising the Vedas, bewilder those whose weak intelligence has been crushed by the weight of too much faith in karma. The specific word used here is uru-vṛttibhiḥ, which indicates that the Vedic mantras, with their confusing variety of meanings in the semantic modes of gauṇa, lakṣaṇā and so on, protect their sublime mysteries from all but those who have faith in Lord Viṣṇu. The Vedas do not truly mean to say in their injunctions that the fruits of karma are eternal, but only indirectly describe in metaphors the praiseworthiness of regulated sacrifices. The Chāndogya Upaniṣad states in no uncertain terms that the results of ritual karma are impermanent: tad yatheha karma-cito lokaḥ kṣīyate evam evāmutra puṇya-cito lokaḥ kṣīyate. "Just as whatever benefit one works hard to attain in this world is eventually depleted, so whatever life one earns for oneself in the next world by his piety will also eventually end." (Chāndogya Upaniṣad 8.1.16)

According to the testimony of numerous śruti-mantras, the entire material universe is but a temporary emanation of the Supreme Truth; the Muṇḍaka Upaniṣad, for one, says:

"As a web is expanded and withdrawn by a spider, as plants grow from the earth, and as hair grows from a living person's head and body, so this universe is generated from the inexhaustible Supreme." (Muṇḍaka Upaniṣad 1.1.7)

"Although this world has arisen from You, who are the very substance of reality, it is not eternally real. The illusory snake appearing from a rope is not permanent reality, nor are the transformations produced from gold. The Vedas never say that they are. The actual, transcendental, nondual reality is Your supremely blissful personal kingdom. To that beautiful abode I offer my obeisances. O Lord Hari, to whom Goddess Indirā always bows down, I also bow to You. Therefore please never release me."