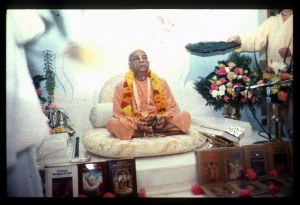 When a person realizes You, he no longer cares about his good and bad fortune arising from past pious and sinful acts, since it is You alone who control this good and bad fortune. Such a realized devotee also disregards what ordinary living beings say about him. Every day he fills his ears with Your glories, which are recited in each age by the unbroken succession of Manu's descendants, and thus You become his ultimate salvation.

Text 39 clearly states that impersonalistic renunciants will continue to suffer birth after birth. One may ask if this suffering is justified, since a renunciant's status should exempt him from suffering, whether or not he has a devotional attitude. As the śruti-mantra states, eṣa nityo mahimā brāhmaṇasya na karmaṇā vardhate no kanīyān: "The perpetual glory of a brāhmaṇa is never increased or diminished as a result of any of his activities." (Bṛhad-āraṇyaka Upaniṣad 4.4.28) To counter the objection thus raised, the personified Vedas offer this prayer.

Impersonalistic jñanīs and yogīs do not qualify for full relief from the reactions of karma—a privilege reserved only for those who are tvad-avagamī, pure devotees constantly engaged in hearing and chanting topics concerning the Personality of Godhead. The devotees hold firm to the Supreme Lord's lotus feet by their unrelenting Kṛṣṇa consciousness, and so they need not strictly adhere to the ritual commands and prohibitions of the Vedas. They can fearlessly ignore the apparent good and bad reactions of the work they do only for the Supreme Lord's pleasure, and they can equally ignore whatever others may say about them, whether praise or condemnation. A humble Vaiṣṇava absorbed in the pleasure of saṅkīrtana, glorification of the Lord, pays little heed to praise of himself, which he assumes mistaken, and happily accepts all criticism, which he deems appropriate.

One receives the authorized chanting of the Supreme Lord's glories by faithfully hearing from "the sons of Manu," the disciplic succession of saintly Vaiṣṇavas coming down through the ages. These sages emulate well the example of Svāyambhuva Manu, the forefather of mankind:

"Although Svāyambhuva's life gradually came to an end, his long life, consisting of a manv-antara era, was not spent in vain, since he always engaged in hearing, contemplating, writing down and chanting the pastimes of the Lord." (SB 3.22.35)

Even if a neophyte devotee falls from the standards of proper behavior by the force of his past bad habits, the all-merciful Lord will not reject him. As Lord Śrī Kṛṣṇa states,

"For those who live in Bhadrakṛṣṇa [the district of Mathurā], I am the object of all worship. Even if the residents of that place fail to properly cultivate the religious principles that one should observe in the holy land, they still become devoted to Me just by virtue of living there. Even if Kali [the present age of quarrel] has them in his grip, they still get credit for living in this place. My devotee who lives in Mathurā is just as dear to Me as you [Brahmā] and your sons—Rudra and his followers—and Goddess Śrī and My own self."

"O Mādhava, please let Me understand You so that I will no longer experience the entanglement of material pleasure and pain. Or else, just as good, please give me a taste for hearing and chanting about You. In that way I will no longer be a slave to ritual injunctions."