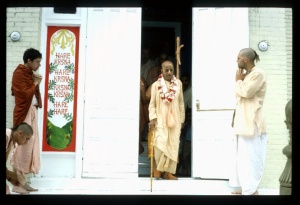 Śrī Śukadeva Gosvāmī continued: One day when mother Yaśodā saw that all the maidservants were engaged in other household affairs, she personally began to churn the yogurt. While churning, she remembered the childish activities of Kṛṣṇa, and in her own way she composed songs and enjoyed singing to herself about all those activities.

Śrīla Viśvanātha Cakravartī Ṭhākura, quoting from the Vaiṣṇava-toṣaṇī of Śrīla Sanātana Gosvāmī, says that the incident of Kṛṣṇa's breaking the pot of yogurt and being bound by mother Yaśodā took place on the Dīpāvalī Day, or Dīpa-mālikā. Even today in India, this festival is generally celebrated very gorgeously in the month of Kārtika by fireworks and lights, especially in Bombay. It is to be understood that among all the cows of Nanda Mahārāja, several of mother Yaśodā's cows ate only grasses so flavorful that the grasses would automatically flavor the milk. Mother Yaśodā wanted to collect the milk from these cows, make it into yogurt and churn it into butter personally, since she thought that this child Kṛṣṇa was going to the houses of neighborhood gopas and gopīs to steal butter because He did not like the milk and yogurt ordinarily prepared.

While churning the butter, mother Yaśodā was singing about the childhood activities of Kṛṣṇa. It was formerly a custom that if one wanted to remember something constantly, he would transform it into poetry or have this done by a professional poet. It appears that mother Yaśodā did not want to forget Kṛṣṇa's activities at any time. Therefore she poeticized all of Kṛṣṇa's childhood activities, such as the killing of Pūtanā, Aghāsura, Śakaṭāsura and Tṛṇāvarta, and while churning the butter, she sang about these activities in poetical form. This should be the practice of persons eager to remain Kṛṣṇa conscious twenty-four hours a day. This incident shows how Kṛṣṇa conscious mother Yaśodā was. To stay in Kṛṣṇa consciousness, we should follow such persons.