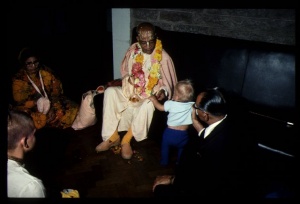 The queens said: O kurarī bird, you are lamenting. Now it is night, and somewhere in this world the Supreme Lord is asleep in a hidden place. But you are wide awake, O friend, unable to fall asleep. Is it that, like us, you have had your heart pierced to the core by the lotus-eyed Lord's munificent, playful smiling glances?

Śrīla Viśvanātha Cakravartī explains that the transcendental madness (unmāda) of the queens filled them with such ecstasy that they saw their own mood reflected in everyone and everything else. Here they point out to the kurarī bird, whom they take to be sorrowing over separation from Lord Kṛṣṇa, that if the Lord actually had any concern for her or themselves, He would not be sleeping comfortably at that moment. They warn the kurarī not to expect Kṛṣṇa to hear her lamentation and show some mercy. In case the kurarī might think that Kṛṣṇa is sleeping with His queens, they deny this by saying that He is gupta-bodha: His whereabouts are unknown to them. He is out in the world somewhere this night, but they have no idea where to go looking for Him. "Ah, dear bird," they cry, "even though you are a simple creature, your heart has been deeply pierced, just like ours. You must have had some contact, then, with our Kṛṣṇa. What keeps you from giving up your hopeless attachment to Him?"