Srimad-Bhagavatam - Eleventh Canto - Chapter 1: The Curse Upon the Yadu Dynasty 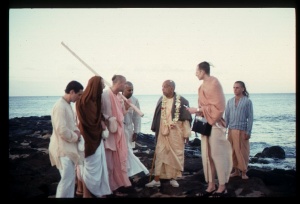 Thus ridiculed by deceit, the sages became angry, O King, and told the boys, "Fools! She will bear you an iron club that will destroy your entire dynasty."

The four defects of the conditioned soul, namely the tendency to commit mistakes (bhrama), illusion (pramāda), imperfect senses (karaṇāpāṭava) and the tendency to cheat (vipralipsā), are not found in pure devotees of the Lord. Lord Kṛṣṇa, however, arranged for the young members of His own family, the Yadu dynasty, to exhibit the dangerous lower propensities of mankind. Thus the Yādava boys imitated the activities of the followers of a pseudodevotional cult.

Just before His disappearance, Kṛṣṇa desired that the sages become angry at the young members of the Yadu dynasty, in order to teach that Vaiṣṇavas cannot be thought of as foolish, ignorant or mundane and to reduce the false pride of His own family members. Sometimes misguided persons assume the roles of pseudodevotees and blaspheme the actual process of pure devotional service and the pure devotees who are surrendered to preaching the mission of the Lord. Such foolish pseudodevotees think that their hatred or envy of the actual preaching mission of the Lord constitutes bhakti, but in fact it constitutes the cause of all trouble both for them and for the unfortunate people who follow them. The preachers of pure devotional service expose the pernicious attempts of pseudodevotees, and similarly the sages headed by Nārada, who were all exalted devotees of the Lord, addressed the young boys of the Yadu dynasty as bewildered fools and told them, "Within this false womb or false dress of a sādhu, a club will take birth that will be the source of your dynasty's destruction."

Especially in India, but now also in the Western countries, there is a class of polluted sense enjoyers who also call themselves Gauḍīya Vaiṣṇavas and pretend to exhibit the highest state of prema-bhakti. They declare that they are on the highest stage of devotion and therefore concerned only with the most intimate affairs of mādhurya-līlā, as exhibited in Vṛndāvana. Sometimes they even dress as gopīs, making a false show of entering into the pastimes of Kṛṣṇa without actually following the standard regulations. In the name of prema-bhakti, they sometimes commit grievous offenses against the pure devotees of Kṛṣṇa. By this incident concerning the iron club from the so-called womb of Sāmba, Lord Kṛṣṇa Himself taught the dangerous results of such pseudodevotion.